From the Editors: Ancestors

In our new book, some of today’s most imaginative writers consider what it means to be made and fashioned by others.

Ancestors opens and closes with stories by authors who are now ancestors and each, in its own way, blasts the reader into the heavens. We could think of no better place to start than with a story that describes the birth of an ancestor: in Binyavanga Wainaina’s (1971–2019) recently rediscovered “Binguni!,” we are led through a psychedelic fantasia of the African afterlife which reassures that death is only a beginning. And then Izumi Suzuki’s (1949–1986) newly translated “Night Picnic” concludes Ancestors in a distant future in which the characters ask—and are at a loss to answer—the question: What does it mean to be human?

Toni Morrison suggests that a defining characteristic of African American literature is what she calls “the presence of an ancestor.”

When we first began imagining Ancestors, the second annual Arts in Society anthology, Toni Morrison had recently died and we’d been rereading her essay “Rootedness: The Ancestor as Foundation” (1984). In it, she suggests that a defining characteristic of African American literature is what she calls “the presence of an ancestor.” And for Morrison, the ancestral presence leads directly to “the community . . . an implied ‘we’ . . . which is to say, yes, the work must be political.”

We were so struck by this formulation—and its intrinsic challenge—that we wanted to see what would happen if we asked some of the most talented writers we know (including our contest entrants): What does it look like if you summon the presence of the ancestors into your art?

The result is what you hold in your hands. The answers we received were diverse and exciting beyond our wildest imaginings, but we feel certain that readers will take from the book an enriched sense of what it means to be a human living in a time, among other times, and to be part of a lineage, among other lineages, to have questions inherited from the past—as well as other “beyonds”—that shape our lives and will, no doubt, continue to shape the future on which we leave our impress.

The book is divided into three sections, “Origins,” “Ruptures & Transformations,” and “Onward,” which reflect our sense of how these pieces speak to our deepest beginnings, to how the tragedies of the past shape us, and to how we carry the mantle of the ancestors forward.

What does it look like if you summon the presence of the ancestors into your art?

When we started this project, we could never have imagined that it would conclude in the midst of a world-historic pandemic that has left millions dead and millions more gutted by loss. It sometimes feels it’s impossible to think of anything else—like Prospero’s famous utterance, “Every third thought shall be my grave.”

But we hope that this book will serve as a summoning spell for readers, invoking ancestral wisdom—which for Morrison meant engaged awareness of each other—to guide us all into and through whatever comes next.

Ivelisse Rodriguez is a contributing arts editor at Boston Review. She is the author of Love War Stories, and a finalist for the 2019 PEN/Faulkner Award and the 2018 Foreword Reviews Indies Award.

Ed Pavlić is author of eleven published or forthcoming books. His most recent work includes Live at the Bitter End (Saturnalia Books 2018), Who Can Afford to Improvise?: James Baldwin and Black Music, the Lyric and the Listener (Fordham UP 2016), Let’s Let That Are Not Yet: Inferno (Fence Books 2015) and Visiting Hours at the Color Line (Milkweed Editions 2013). He is Distinguished Research Professor in the English Department and in the Institute for African American Studies at the University of Georgia.

Adam McGee is the Arts Editor and Managing Editor of Boston Review. He has a PhD in Black Studies from Harvard. His writing has appeared in Prairie Schooner, Electric Lit, Poets & Writers, Raleigh Review, Painted Bride, Memorious, Cimarron Review, and Assaracus.

Alexis Pauline Gumbs is author of Undrowned: Black Feminist Lessons from Marine Mammals and Dub: Finding Ceremony. She is one of the guest editors of Boston Review’s second anthology from its Arts in Society project, Ancestors. 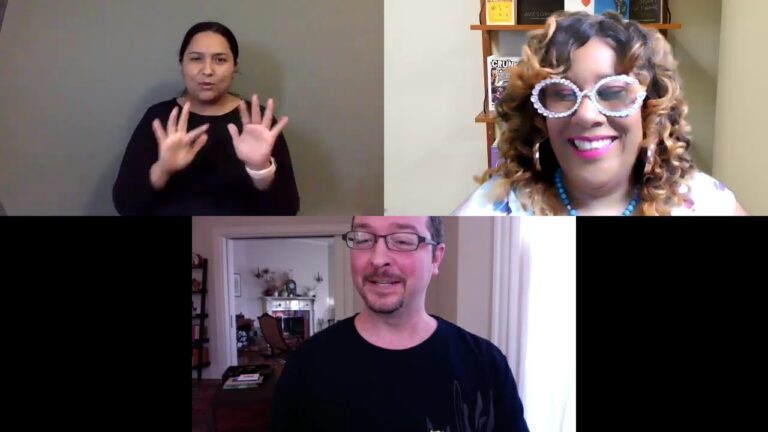