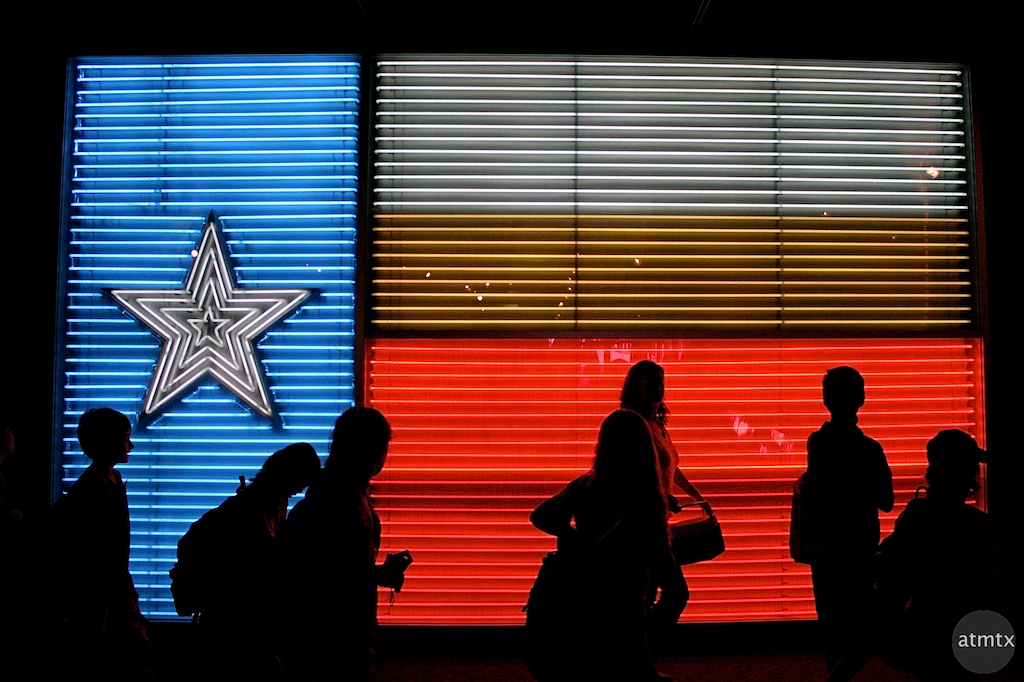 Testing the Waters in Texas

God Save Texas: A Journey into the Soul of the Lone Star State
Lawrence Wright
Knopf, $27.95 (cloth)

The future of the United States looks a lot like today’s Texas, or so suggest two recent, unflinching books about the perils and promise of the nation’s most controversial state. On the side of peril is journalist and environmental writer Seamus McGraw who explores the “maddeningly complicated” forces that dictate water usage in the face of impending climate catastrophe. Celebrated New Yorker writer Lawrence Wright, on the other hand, holds on to the promise that there is a kinder version of Texas—“still raw, not fully formed”—that might yet emerge. But both Wright and McGraw end on the note that whoever can figure out how to save Texas might just save the rest of us in the process.

Can Texas be saved from its own selfishness, or will it implode and take the rest of us down with it?

Although vastly different in scope, both books encourage us to see Texas as a microcosm of the United States, a lens that feels earned in our current political moment. For Wright—who has lived in Abilene, Dallas, and Austin—Texas is the “winning archetype” of the Trump era, the bellwether to end all bellwethers: what happens in Texas, according to Wright,  tends “to disproportionately affect the rest of the nation.” Texas, after all, betokened the national rise of an inflexible and malicious conservative politics that views the common good and government as “a kind of kryptonite that weakens entrepreneurial muscles.” “Illinois and New Jersey may be more corrupt, Kansas and Louisiana more dysfunctional,” Wright muses, “but they don’t bear the responsibility of being the future.”

Years ago, Texas was my future in a literal sense. I briefly lived in Beaumont, the birthplace of the state’s oil and gas industry. My orientation to the city came with instructions on what to do in case of oil fires, and the Gulf War was used as a reference point. It was not how I imagined Texas to be, but Texas is not concerned with the fantasies and judgments of fickle guests. Take the case of John Bainbridge, one of Wright’s predecessors at the New Yorker, whose own record of his time in Texas became the polarizing Super-Americans (1961). He wrote, “Texas is a mirror image in which Americans see themselves reflected, not life-sized, but as in a distorting mirror, bigger than life. They are not pleased with the image.”

Texans, so the cultural myth-making goes, are concentrated American character, for better or worse. As Wright lays it out:

Texans see themselves as confident, hardworking, and neurosis-free—a distillation of the best qualities of America. Outsiders view Texas as the national id, a place where rambunctious and disavowed impulses run wild. Texans, they believe, mindlessly celebrate individualism. . . .We’re reputed to be braggarts; careless with money and our personal lives; a little gullible but dangerous if crossed; insecure but obsessed with power and prestige.

The irony, as Wright points out, is that by this standard, the best representation of Texanness these days is not a Texan at all, but the “narcissistic Manhattan billionaire now sitting in the oval office.” With a few stylistic modifications—swapping a taped-down tie for a cowboy hat, for instance—Trump is the stereotype of what many Americans imagine to be the last great generation of Texas dealmakers. Trump is brash, compassionless, eager to turn everything into a commodity, and masquerades stubbornness and immaturity as a political philosophy.

It is perhaps not surprising, then, that Texas is the future that Trump and his allies want: a utopia where “visionary entrepreneurs—not government—conjure up entire industries and create opportunity in the form of good jobs and enlightened communities.” But those familiar with the current state of Texas will already know that the bill of sale comes with some terrifying fine print: widespread poverty, significant and unnecessary obstacles to medical care, looming environmental catastrophe, and the inhumane treatment of immigrants.

While Texas might be, as Wendy Davis once suggested, a “non-voting blue state,” it is also a place where many with power and capital, according to Wright, are intent on looking backward “to a time when homosexuals were unseen, minorities were powerless, abortion was taboo, business and industry largely unregulated, and science stood respectfully in the shadow of religious belief.”

‘Whiskey’s for drinking, water’s for fighting over,’ was once the logic of the West, and it is still a logic that fuels much of Texas’s water usage.

There is a noticeable and refreshing lack of defensiveness in Wright’s journey through Texas and, to be fair, there is more than just political crucible to be found in God Save Texas, although his chapters on politics and power are among the most fascinating. Quirky anecdotes, philosophical musings on culture, and hyperlocal travel writing abound.

Wright’s book is the 300-page response to New Yorker editor David Remnick’s challenge to “explain Texas,” but its central theme is the question of whether or not Texas can be saved from its own selfishness, or if it will implode and take the rest of us down with it. Because for all the wealth and talent accumulated in Texas, it remains, according to Wright, a place where “there is a timidity about confronting the challenges in front of us.”

One of those challenges is taken up by McGraw in A Thirsty Land, a book about water but also more broadly about “dwindling resources and the battle over them in a world that is growing by leaps and bounds.” Everything is bigger in Texas and that includes its problems.

“Whiskey’s for drinking, water’s for fighting over,” was once the logic of the West, and it is still a logic that fuels much of Texas’s water usage. Now the fights are bloodless and bureaucratic, waged through the courts or shifting political alliances, but the stakes are no less high. Access to water is a fierce competition in Texas that pits regions and municipalities against one another, urban Texans against rural Texans, and farmers against frackers. The state has no cohesive water plan and skepticism toward regulation impedes progress.

Ground water and surface water are legally distinct in Texas, which creates regulatory challenges, as the two are obviously intimately connected. Over a century ago, Texas lawmakers deemed groundwater—from small underground streams to vast aquifers such as the Ogallala—to be “occult and mysterious” in origin and therefore beyond the scope of common law. Regulation defers to the doctrine of private property, giving landowners the right to everything above and below their land. What if that water happens to have other points of origin or also flow beneath another’s property? Texas has a rule of thumb for that: “whoever has the largest pump wins.”

Texas is one serious drought away from a reckoning at best and a devastating environmental catastrophe at worst.

Surface water in Texas is equally complicated. Texas has 5,000 miles of rivers and 3,700 named streams. Surface water is technically a public property, but rights for industrial use are granted on the basis of seniority—a “first in time, first in right” doctrine. But since Texas’s exponential growth is a recent phenomenon, many “junior” rights holders are municipal service providers.

Dow Chemical, for example, which struck a claim to a portion of the Brazos River in 1940, sued the Texas Commission on Environmental Quality in 2012 to compel it to reduce Galveston County’s water usage during a drought period when Dow, the “senior” rights holder, had difficultly drawing water. Dow won.

McGraw argues the Dow lawsuit is a complicated but representative example of the issues that shape Texas water policy. Although the laws, policies, and plans are complex, the concerns that drive them are easy to understand. All kinds of growth in Texas—from the expansion of urban populations and the agricultural industry to hydraulic fracking—require water. But Texas is one serious drought away from a reckoning at best and a devastating environmental catastrophe at worst.

Even if Texas is spared from the severity of a major drought, dwindling access to water is life-shaping for many. McGraw’s examples are filled with farmers on the brink of bankruptcy, intrepid water harvesters, unappreciated environmental quality officials, and residents of colonias, predominately Latino neighborhoods near the border that often lack access to safe water.

Indeed, conservative, liberal, Republican, Democrat, most of those who study water issues in the state of Texas agree on one thing, that the state’s bottom-up paradigm for developing water policy exacerbates local problems, institutionalizes conflicts between regions of the state—the dry west versus the water-logged east—and, most importantly, risks leaving the state woefully unprepared to face a prolonged water crisis that sooner or later is all but guaranteed.

The only solution, however, is one that many politicians in Texas find heretical: water must be regulated, and the government must take an active role in its regulation.

While conservation and technological advancements in water recycling can help, the way forward, at least for McGraw and the experts that inform his study, is the regulation of water as a commodity. “Water,” he writes, “is also a commodity, a product like oil or gas, or timber in the Sulfur River Basin, which can be bought or sold and with a value that can be set by the market, a market that can be prodded or restrained as need be by the judicious application of tax policy.”

The only solution is one that many politicians in Texas find heretical: water must be regulated, and the government must take an active role in its regulation.

This model, McGraw suggests, could be bent toward conservation by rewarding businesses and individuals that conserve water with tax incentives and could include subsidies for low-income users. And if Texas can embrace such a model or other inventive solutions to the national water shortage, their solutions could spread for the good of the country.

“Every challenge that America faces—economically, environmentally, culturally, and politically, is cast against the varied and magnificent landscape of Texas in stark relief,” McGraw writes. This is why A Thirsty Land is not the making of a Texas crisis, but an American one. As McGraw asks “Instead of allowing a binary yes or no option for the question ‘Do you identify as Texan?,’ there ought to be a third choice,” McGraw suggests, “Shouldn’t we all?”

His point, especially when paired with Wright’s musings, is well taken. Our fates are connected, after all, despite the bravado of conservative individualism or the dismissiveness of what Wright calls the “liberal loathing of Texanness.”

Yet while both books remind us that we must learn to act on the lessons we draw from Texas, it is only fair to ask in return whether Texans—or, at least those who control its fortunes—are ready to reciprocate by casting their lot in with the rest of us.

Elizabeth Catte is a writer and public historian based in the Shenandoah Valley, Virginia. She is the author of What You Are Getting Wrong About Appalachia.