Under the Cross in China

We’re at a wedding reception like any other in China. In a hotel restaurant under fluorescent lights, ten guests awkwardly chatting at each table, we wait for the dishes to come around on a spinning tray. Projected against a far wall is a slide show of the couple’s wedding photos—willow trees, a fountain, and faces rendered smooth, white, and alien by Photoshop. Moments before had been the grueling round of photographs with the bride and groom as they accepted traditional gifts of hongbao—red envelopes of cash.

Except there is a difference: the usually jaded wait staff have been listening in, curious about the proceedings. So, too, are some of the attendees. “I’ve never been to such a Western wedding,” a woman at the table comments. “Not Western,” a tablemate corrects her. “Christian.”

The cross—fashioned out of pink carnations—hanging at the front of the room makes the difference clear. So does the ceremony itself, which features a choir, an hour-long sermon, and “marital testimonies” from the bride and groom.

While Christian ceremonies in China are still a rare sight, they have become common enough to warrant the specialized services of Christian wedding planners. “Daniel” Shao, orchestrator of this particular wedding and dozens like it every year in Nanjing, began his business while still a college student. Born to a Christian household, Daniel found a ready-made clientele within his congregation, largely composed of twenty- and thirty-somethings who feel bound to marry within their faith.

Through trial and error, Daniel overcame his inexperience. “You know that old saying, ‘I’ve never eaten pork but I’ve seen a pig run’?” he asks. “I had a general impression of how weddings went, so I just went ahead.”

The intent, however, was not so haphazard—it was to create a more “sacred” ritual. As Daniel explained over milk-tea one night, the Chinese weddings he grew up with emphasized extravagant shows of status, pageantry, and the much-celebrated quality of renao (“hot and loud”). But Christian weddings do away with many of these customs. For instance, firecrackers, which are meant to ward off evil spirits, are not allowed. Also discouraged are pre-wedding motorcades and the traditional nao dongfang (“after-party”) during which bride and groom withstand a barrage of dirty jokes en-route to the wedding chamber.

The Christian wedding has proved attractive even to nonbelievers. Some of his non-Christian clients, Daniel admits, only want the cache of a Westernized ceremony. Others are compelled by what they see as a Christian ceremony’s “weight” and “meaningfulness.” Corporate wedding planners have also gotten in on the action. Church spaces have come into high demand. “Some companies even hire actors to wear robes like a priest and officiate over a Bible,” Daniel says.

Ironically, the churches sought after as ceremonial settings by secular Chinese couples are largely off-limits to Christians, who congregate in underground house churches. These independent congregations reject registration with the state-approved Three-Self Protestant church, as required under Chinese law. Since all public church buildings are registered, Daniel’s congregation and others refuse to hold weddings in them. “It might cause a misunderstanding,” he says, “and make it seem like we recognize Three-Self to be a real church.”

So, wistfully, his Christian clients keep to restaurants and hotel banquet halls. But secular spaces provide benefits as well: in them, Christians have a chance to proselytize openly in a country where public evangelism is forbidden. The targets of proselytizing are likely to be the bride or groom’s immediate family, which sometimes causes friction. Daniel recounts a wedding during which the groom’s father stormed off mid-ceremony. Tense or not, these encounters are a small fraction of what many Chinese Christians would like to see more of—the push of religion against the stronghold of “sinful” materialist sensibilities.

But not all that’s secular can be kept out. Back at the wedding reception, the audience, Christian and non-Christian alike, are in hysterics at a sketch put on by the choir members, spoofing the popular Chinese dating show If You Are the One. On the show, twenty-four single women judge male contestants for romantic suitability. As they batter the guests with questions concerning their income and family backgrounds, the bachelorettes can dismiss the “male guest” by turning off the light on their consoles. Participants in the wedding sketch get the calculated reality-show desperation just right. At the end of the program, the only ones remaining are the grinning bride and groom, and the host, who shouts triumphantly, “God has kept her light on for you!

Xiao-bo Yuan is a Fulbright scholar and PhD candidate in anthropology at the University of Chicago. 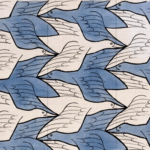