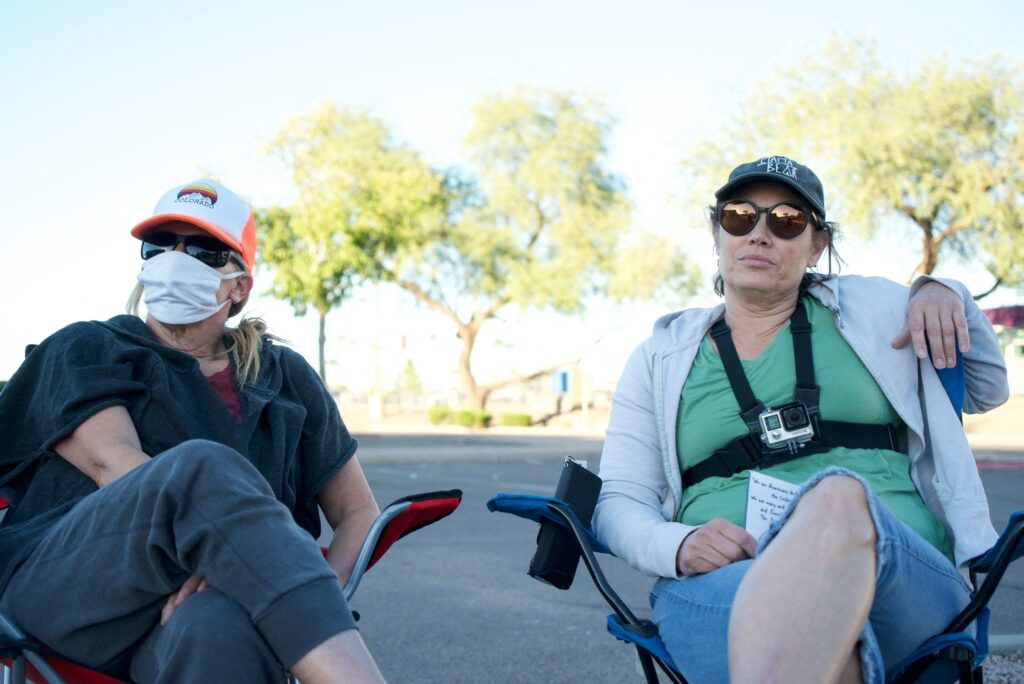 The day after the midterm elections, Boston Review Coeditor-in-Chief Deborah Chasman spoke with contributing editor Robin D. G. Kelley about the election results and what they mean for U.S. politics. An earlier version of this conversation ran last week in our new from-the-editors newsletter. Get it in your inbox by signing up for our weekly newsletter.

Deborah Chasman: While a handful of races still haven’t been called and the Georgia Senate race is going to a run-off, the prediction of a “red wave” turned out to be wrong. After Trump’s victory in 2016 you wrote of “the rewhitening of America,” channeling Cedric Robinson. But you were also very clear that this condition isn’t inevitable. Racial regimes are fragile, products of class power; they can be fought. Are we seeing hints of Trumpism’s fragility in these election results?

Robin Kelley: Every racial regime in the United States is an expression of class power. Trumpism has always been fragile because its ideological foundations are based on the deceptions Cedric identified in Forgeries of Memory and Meaning (2007): the myths of white patrimony, patriotism, nationalism, non-white inferiority, shored up by exploited and oppressed white people who believe they will one day get a larger share of the pie. This is the basis of the real “fake news” that drove millions to the polls to vote for J. D. Vance, Ron Johnson, Kari Lake, and Herschel Walker.

There was a red wave of a kind, but it resembled the “red shirts” of the post-Reconstruction South.

But these myths have to be opposed. Even if Walker loses, his strong showing proves, in Cedric’s words, that the deception “still serves.” I understand why many are happy that the Democrats did surprisingly well in the midterms; it is important that the Democrats held the Senate and the basic protection of reproductive rights sailed to victory in many states. But that was not the result of a sudden, rapid diminishing support for emergent fascism or some wholesale abandonment of Trumpist ideas (which, by the way, are not really Trump’s but have circulated for decades). It was the result of all the hard work and mobilizing to get out Democratic votes, to resist voter suppression at every turn, to raise money, to outmaneuver the right. And still, most of these races were exceedingly close, and Democrats did not always prevail.

There was a red wave of a kind, but it resembled the “red shirts” of the post-Reconstruction South—the white supremacist organization that used terror to keep Black people and all Republicans from the polls to ensure Democratic victories. This time it took the form of gun-toting right-wing groups supposedly providing “election security” at the polls in Arizona; of Florida passing sweeping legislation to suppress the vote, forcing newly enfranchised formerly incarcerated people to pay back all fees, fines, and restitution costs associated with their conviction before they could register, and then arresting people for supposedly voting illegally; of Georgia enacting the so-called Election Integrity Act, which reduced the number and limited accessibility of absentee ballot drop boxes and imposed new ID requirements on requesting those ballots, among other things. There are many more examples.

It is precisely because racial regimes are always fragile, however—built on deception and mystification—that force is often required to sustain them. Suppressing the vote by any means necessary has always been a requirement for advancing the “rewhitening” of America.

DC: What do you make of J. D. Vance’s victory in Ohio? Some liberals—the kind who praised his book Hillbilly Elegy—seem shocked by his transformation from never-Trumper to Trump ally.

Every racial regime in the United States is an expression of class power.

RK: If some liberals thought the book was great, that’s an indication of their bankrupt ideas. Everyone I know sharply critiqued the book for its racial and class politics—that is to say, his clear contempt for poor white people and promotion of a politics of responsibility, not too different from the ongoing attack on poor Black people. No one should have been surprised that he would become a darling of the Republican Party.

DC: This year some Democrats campaigned on new tough-on-crime postures in response to the Republican charge that abolitionist organizing is responsible for an increase in crime rates (I know those numbers themselves are debatable). What did the election tell us about the legacy of the Movement for Black Lives?

RK: Of course, there is nothing new about the Democrats embracing law and order. The minute Republicans start talking about crime waves and predators, the Democrats usually fall in line since these racially tinged moral panics can win elections. And even before the midterms, a bunch of Democrats, many of whom are Black, have campaigned on promises to be tough-on-crime and increase funding for police.

This was Eric Adams’s pledge when he was elected mayor of New York City, for example, and he not only fulfilled that promise—he exceeded it by resurrecting the NYPD’s anti-gun unit, prosecuting “quality of life” violations, targeting unhoused people to force them off the streets, and erroneously attacking bail reform for a spike in crime, among other things. Earlier this year Chicago Mayor Lori Lightfoot, who has a history of antagonism toward movements critical of the police, made the outrageous assertion that anyone charged with violent crimes should be presumed guilty and denied bail automatically. The right invokes the specter of BLM and demands to defund the police as causes for increases in violent crimes, and they go after progressive prosecutors, alleging that “woke” criminal justice reform is driving a crime spike. A right-wing campaign succeeded in recalling San Francisco District Attorney Chesa Boudin and is trying to do the same to LA’s George Gascón. Philadelphia’s Larry Krasner is currently a favorite target of Republicans in Pennsylvania.

But as Keeanga-Yamahtta Taylor points out, the Republican tough-on-crime strategy proved ineffective in some states, notably in Pennsylvania, Illinois, Michigan, and Colorado. As Taylor observes, “the returns from the midterm elections hold out the possibility that the public, after a decade of the Movement for Black Lives, is open to more complex understanding of crime, its roots, and its solution.” This is a promising sign, and evidence that the rebellion of 2020 did have a positive impact.

DC: Looking beyond electoral politics, your work has always centered the role of social movements. What kind of insurgency is needed today, and where do you see the greatest possibilities?

RK: I’m not prone to predicting anything, but at least two things are clear. First, fascism is still a threat, despite some very important global victories (including the election of Lula in Brazil and Gustavo Petro and Francia Marquez in Colombia). Fascism never disappears because people come to their senses; it must be resisted and defeated.

The resurgence of the labor movement represents the most powerful insurgency against the ravages of racial capitalism.

Second, the resurgence of the labor movement—more attentive to the intersections of race, gender, disability, and climate catastrophe than ever—represents the most powerful insurgency against the ravages of racial capitalism. I’m thinking about the new leadership of SEIU and their Unions for All campaign, UNITE HERE Local 11 Worker Power Campaign, the Southern Worker Power Program organized by the Southern Workers Assembly, the organizing efforts of workers at places like Starbucks, Amazon, and Chipotle, the Los Angeles Black Worker Center, and the powerful leadership of National Nurses United—to name only a few initiatives.

Today’s labor movement is young, dynamic, anti-fascist, militant, and willing to build alliances with many social justice organizations fighting the expanding carceral and security regime, war, the deportation regime, and a U.S. foreign policy that advances a neoliberal free trade agenda at the expense of all workers. This work is essential.