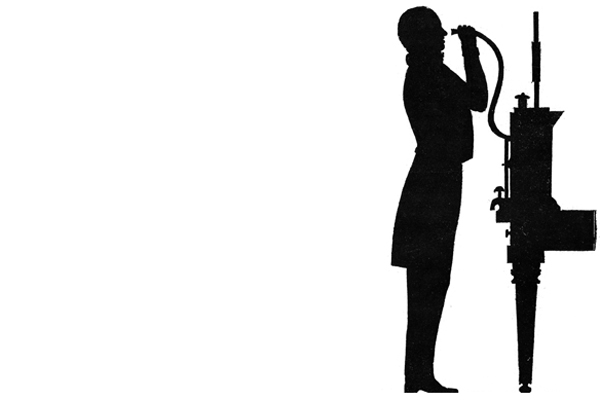 "On the capacity of the lungs and on the respiratory functions," John Hutchinson, 1846. Historical image demonstrating a spirometer in use. Courtesy of Wellcome Images.

In the fall of 2015, U.S. college students ignited in protest about campus and national racism. Chanting “I Can’t Breathe” and “Hands Up, Don’t Shoot”—recalling the final cries and acts of unarmed African Americans who died at the hands of police—the scholar-activists joined the Black Lives Matter movement that has burgeoned since the shootings of Trayvon Martin, Michael Brown, and many others. At my home base, Brown University, school officials responded by drafting a detailed action plan and inviting community comment, a process that is ongoing. While the plan pays attention to student demands for more diversity in the faculty and the student body, as well as improvements in campus climate, it fails to address the need to reevaluate and revise the curriculum in both undergraduate and professional schools—particularly with regard to what we do and do not teach about race, to how both silence and subtly coded messages continue to transmit racial bias.

Integrating studies of race, ethnicity, class, and gender into the curriculum is not easy. And it does not suffice to develop specialized elective courses, such as the one I offered more than twenty-five years ago—Women and Minorities in Science. Such courses exemplify what we, in the early days of women’s studies, used to refer to derisively as “just add women and stir.” The “stir” approach addresses problems of representation but does not challenge underlying theories of disciplinary knowledge.

Biology courses should not be able to get by, for example, with only mentioning a few famous scientists of color and then returning to business as usual. To properly address race, courses need to present the still-disputed science behind concepts of race and genetics, or examine how Darwin’s racial views led him to develop the idea of sexual selection, or teach about the genetics of skin pigmentation and convergent evolution of human phenotypes. Change that matters can only come from altering the content and pedagogy of mainstream courses for generations to come.

In American medicine, even lung capacity is racialized.

It is especially critical that such changes are made to medical school curricula, as they are the vehicle by which we train doctors and researchers, in whose hands lay the health of our diverse population. Nationally, medical students have recognized that deaths such as those of Eric Garner and Michael Brown speak to a public health emergency. At Brown’s Alpert Medical School, only a small number of students learn about how race and medicine intersect; they do so in elective courses either taught by an interested faculty member or organized by the students themselves. In 2014 a white medical student at Brown published an opinion piece in the Journal of the American Medical Association lamenting the lack of attention to, and hidden messages about, race that she encountered in her studies. She noted that her textbooks illustrated examples of psoriasis and rashes with pictures of white skin, but syphilitic lesions with pictures of black skin. In the clinic she observed that white patients were more likely to receive pain medication than were patients of color (a continuation of the historical pattern of giving less anesthesia to black patients, who, scientists claimed, felt less pain) and that language barriers often led to fudged consent-form signings. In short, the silent curriculum taught her “to minimize the pain, forgo the consent, blame the behaviors and dismiss the concerns of [her] patients of color.”

The curricular problems run deep. Physicians are often taught—outright or through modeled behavior—to use racial generalizations and assumptions as shortcuts, resulting, at worst, in misdiagnoses and, at best, lost time reaching the right conclusion and treatment. Consider the fate of a man with cardiac distress who enters a New York City hospital. If he is white or Latino, he is twice as likely to be recommended for cardiac bypass surgery than if he is African American. Many layers undergird a physician’s thinking about who is or is not a good candidate for such surgery, but a significant factor is how racial differences in rates of heart disease (or any other disease) are taught in medical school.

Some medical students at Brown documented the problem by taking screen shots of slide after slide in which professors listed racial differences in disease rates: blacks suffer more from essential hypertension and sarcoidosis but less from cystic fibrosis, have lower rates of post-operative compliance, etc. The lists appear in PowerPoint presentations with no context or evaluation and with the unspoken implication that racial differences are genetic. Yet abundant evidence—ignored in the medical curriculum—shows that essential hypertension is a national rather than a racial phenomenon. Using disease rates to represent racial difference can lead physicians to misdiagnose cystic fibrosis in African Americans and sarcoidosis in whites.

The divergent sorts of medical care received by whites and blacks can have dire consequences. In Fatal Invention: How Science, Politics, and Big Business Re-create Race in the Twenty-first Century (which I previously reviewed), legal scholar Dorothy Roberts reports that black women are twice as likely as white women to die of breast cancer. From historical data, we know that this is a recent phenomenon and thus lacks any basis in genetics. Rather, it appears to stem from the fact that black women are less likely to be diagnosed early and receive inadequate medical care once they are.

Antiquated ideas about race even govern basic physiological measurements. In Breathing Race into the Machine: The Surprising Career of the Spirometer from Plantation to Genetics (2014), Lundy Braun recounts the surprisingly long life of data collected during the Civil War, which purported to show that blacks had innately lower lung capacity than did whites. The findings were based on data collected from the newly integrated Union Army: race was assumed on the basis of appearance, data sets often arrived garbled, and results from sickly black soldiers were accidentally mixed with those of the healthy.

Despite these obvious shortcomings and decades of rebuttals, the belief in the lower lung capacity of blacks became part of medical dogma—and remains so to this day. It is often incorporated into the machines that measure breathing capacity (spirometers) as a physical switch flipped one way or the other depending on the technician’s assessment of the patient’s race. In other words, technicians present spirometry results “corrected” for race, so that for an African American to receive a diagnosis of impaired lung function—for example, a worker seeking disability compensation for lung damage from asbestos—he or she has to be dramatically sicker relative to a white American before receiving an equivalent disease diagnosis. This racial difference, based on century-and-a-half-old, out-of-context statistics is still taught in medical school lectures as innate or essential.

The belief in racial essentialism means that the medical curriculum pays scant attention to the means by which the social experience of race produces disease—how, for example, the lived experience of racism makes black bodies more susceptible to stress-related illnesses such as hypertension and depression. This ignorance is not for lack of scholarship showing how racism becomes a factor in illness. Sociologists such as Troy Duster, historians of medicine such as Braun and Keith Wailoo, public health experts such as Nancy Krieger, and physiologists such as Peter Sterling have contributed to a rich literature demonstrating how social experience produces bodily differences.

True curricular reform therefore means much more than adding race and stirring. It means taking second and third looks at fundamental scientific understandings of the body. It means questioning bedrock beliefs about the origins of physiological difference. And it means exploring health disparities as the bodily expression of social inequality. It is no accident that some of the world’s most radical activists—Che Guevara, Rebecca Gomperts, Salvatore Allende, Frantz Fanon, and Ana Livia Cordero—were also physicians. Calling for the medical curriculum to heal itself may mean calling as well to heal society.