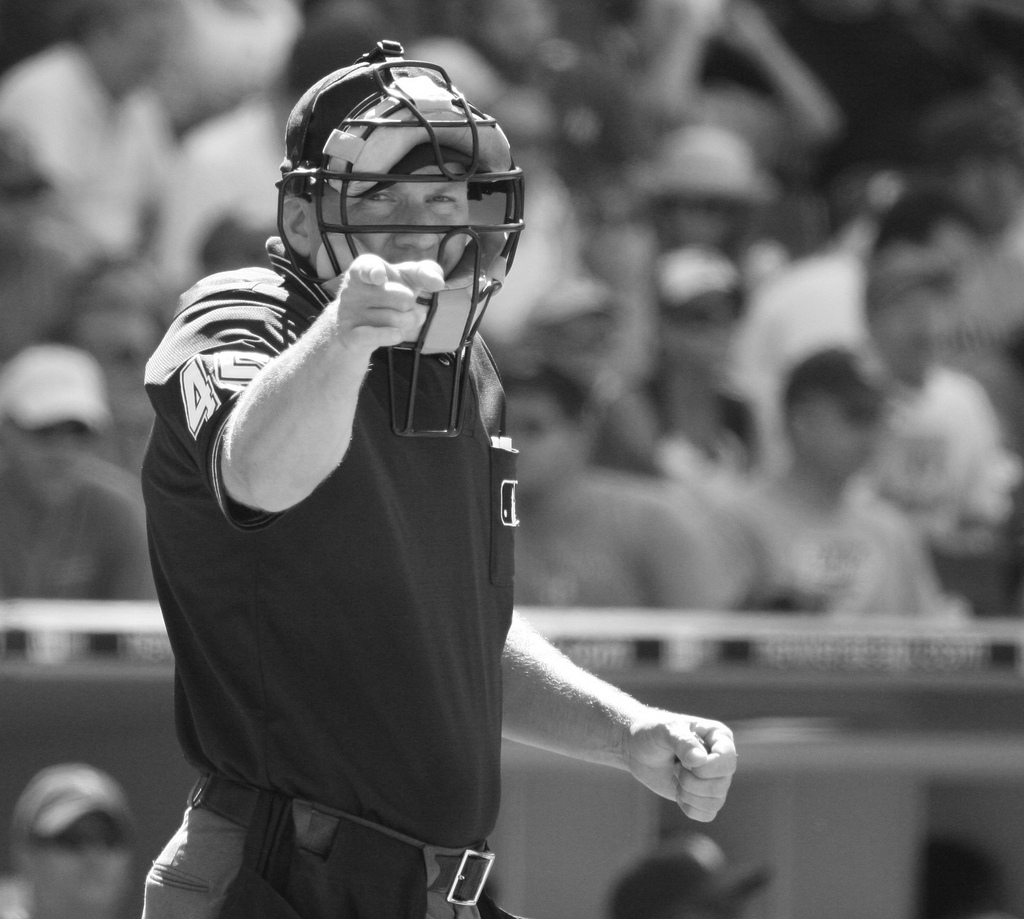 When the Umpire Throws the Pitches

The Court is not simply deciding which cases to hear, but is also directing the parties to address issues the justices want to take up.

During his confirmation hearings, Chief Justice John Roberts famously compared judges to umpires. The analogy was designed to convey an image of judicial modesty: judges, like umpires, play a “limited role,” impartially applying rules made by others rather than serving as partisans for one team or another. And he assured the Senate that he would “remember that it’s my job to call balls and strikes and not to pitch or bat.”

Umpires leave the tactical choices to the teams. In the legal sphere, that kind of reserve led Alexander Hamilton, in Federalist No. 78, to describe the judiciary as the “least dangerous” branch of the government. It has “no direction either of the strength or of the wealth of the society; and can take no active resolution whatever,” Hamilton wrote.

In recent terms, however, the Roberts Court has been taking a more assertive stance. Many observers have remarked upon the Court’s decisions striking down important government policies ranging from federal campaign finance laws to local school boards’ desegregation plans. Fewer have noticed a second form of assertiveness: the Court is not simply deciding which cases to hear, but is also directing the parties to address issues the justices want to take up.

To be sure, the Court sometimes acts appropriately in pressing issues the parties have chosen not to raise. The recent challenge to the individual mandate in the Affordable Health Care Act provides an example. Both the challengers and the federal government want the Court to decide the question immediately. But a federal statute (the Anti-Injunction Act) bars courts from entertaining certain kinds of challenges to federal taxes before those taxes have actually been collected. So the justices properly directed the litigants to address whether they had the power to decide the case at this juncture.

At other times, however, the Court ranges far afield in forcing the parties to address issues they may deliberately have chosen to forgo. And the Roberts Court has shown a troubling tendency to use this tool to overturn precedent.

The most striking examples involve scheduling cases for re-argument so that the justices can consider issues the parties didn’t originally press. Two terms ago the Court scheduled re-argument in Citizens United v. Federal Election Commission, transforming the case from a narrow inquiry into a particular application of the McCain-Feingold campaign finance law into a high-stakes examination of all corporate political spending. The Court directed the parties to brief and argue about whether it should overrule its decision in Austin v. Michigan Chamber of Commerce (1990), which held that restrictions on campaign spending could be justified by the government’s interest in preventing “the corrosive and distorting effects of immense aggregations of wealth that are accumulated with the help of the corporate form and that have little or no correlation to the public’s support for the corporation’s political ideas.” It then issued a bitterly divided 5-4 decision freeing all corporations and unions to use general-treasury funds for any kind of election-related speech and setting the stage for the rise of super PACs.

This term the Court has ordered re-argument in another case involving corporate conduct, Kiobel v. Royal Dutch Petroleum Co. The plaintiffs in Kiobel, former residents of the Ogoni region of Nigeria, claim that the defendants—including the Shell oil company—provided logistical and financial support to government security forces who engaged in a series of human rights abuses, including extrajudicial killing and torture. The case was brought in the United States under the Alien Tort Statute (ATS), which gives federal district courts jurisdiction over tort claims by aliens for “violation[s] of the law of nations.” The ATS was enacted by the first Congress in 1789 and, after lying dormant for the next two centuries, was resurrected in the Second Circuit Court of Appeals’ decision in Filártiga v. Peña-Irala (1980) to permit foreign victims of particularly egregious and universally condemned human rights abuses to sue the perpetrators in U.S. courts.

In order to overturn precedent, the Roberts Court has been forcing parties to argue issues they didn’t raise.

The question on which the Supreme Court initially granted review—the question raised by the parties before it—was whether corporations can be sued under the ATS or whether it permits lawsuits only against natural persons. And the answer is important. The particular people involved in the violations may not be amenable to being haled into our courts, because they lack sufficient contacts within the United States to fairly force them to litigate here. And even when they can be sued in the United States, it may be hard to collect on any judgment. By contrast, it’s relatively easy to sue a multinational corporation that also does business domestically, and the company will have assets to satisfy a judgment. (One might be forgiven, in light of the Court’s decision in Citizens United, for seeing something ironic about the argument that corporations are sufficiently like persons to be entitled to constitutional speech protections while being sufficiently different to avoid liability for human rights violations.)

But the Court has upped the ante even further with its order for re-argument. A week after it heard oral argument, the Court told the parties to file new briefs addressing whether the Alien Tort Statute allows U.S. courts to hear cases “for violations of the law of nations occurring within the territory of a sovereign other than the United States.” That order raises the possibility that the Court, beyond shielding foreign corporations from being sued in U.S. courts, will hold that under the ATS no one can be sued for human rights violations that occur outside the United States unless they occur on the high seas or in some no man’s land. In short, the Court’s rewritten question may ensure that plaintiffs in Kiobel and similar cases will be unable to use the ATS to sue torturers who committed their violations on dry land, even if they are now living in the United States.

The question the Court has posed might be viewed as one of statutory interpretation: What does the ATS mean? Framed that way, Congress could override a restrictive interpretation by the Supreme Court and reopen U.S. courts to international human rights cases. Congress did just that in 1991, responding to a narrow judicial interpretation of the ATS by enacting the Torture Victim Protection Act, which authorizes suits against an individual who, under color of foreign law, engages in torture or extrajudicial killing. (In a just-decided case, Mohamad v. Palestinian Authority, the Court held that the TVPA does not authorize suits against organizations. I helped to represent the plaintiff in that case.)

But comments during the initial round of oral argument in Kiobel suggest that some of the justices are skeptical of whether Congress has the constitutional authority to open U.S. courts to human rights suits involving conduct overseas. Justice Alito asked whether there is a basis in Article III of the Constitution, which lays out the federal judicial power, “for a lawsuit like this.” If the Court were to answer that question in the negative, Congress would be disabled from responding.

We won’t know what the Court does in Kiobel until sometime next term. But its actions so far are disturbingly consistent with its general willingness to rethink existing legal principles in the service of restricting plaintiffs’ access to the federal justice system.