In contrast to Loving v. Virginia, on the same-sex marriage issue the Court may have to make a decision before a national consensus emerges.

It’s springtime, and marriage is in the air. Major constitutional battles about legal recognition for the marriage rights of same-sex couples are wending their way through the federal courts. Two couples are challenging California’s marriage restrictions; several other couples, in a series of lawsuits around the country, are challenging the federal government’s Defense of Marriage Act (DOMA) for denying federal benefits to couples validly married under state law in states such as Massachusetts (which issues marriage licenses to gay couples) and New York (which recognizes same-sex marriages performed elsewhere).

Along the way, supporters of marriage equality have commonly invoked the Supreme Court’s 1967 decision in the aptly captioned Loving v. Virginia. There, the Court held that Virginia’s criminalization of interracial marriage violated two provisions of the Fourteenth Amendment: the equal protection clause, because Virginia’s law could be explained only as the product of illegitimate racial prejudice, and the liberty element of the due process clause, because Virginia denied Mildred and Richard Loving “the freedom to marry” that “has long been recognized as one of the vital personal rights essential to the orderly pursuit of happiness by free men.” Restricting marriage to opposite-sex couples likewise relies on prejudiced, or empirically dubious, propositions about gay people and their families, and denies them a status that confers dignity and a bundle of tangible entitlements central to modern life.

But even as we embrace Loving and the rights of loving couples, we should remember that it takes much more than a celebrated judicial decision to realize constitutional values.

Loving was the end point of a sustained assault on racial discrimination, and most of the troops in that campaign were not Supreme Court justices. For example, the Court’s foundational 1954 decision in Brown v. Board of Education, forbidding segregation in public schools, came after President Truman had already issued executive orders ending segregation in the military. When Brown reached the Court, President Eisenhower’s Department of Justice filed briefs urging the justices to hold racial segregation unconstitutional. And by the time the Court decided Loving, the vast majority of states had already repealed laws forbidding interracial marriage. Loving was decided a generation after the California Supreme Court, in Perez v. Sharpe, had used the Fourteenth Amendment to strike down California’s ban on interracial marriage. (In contrast to the California Court, the U.S. Supreme Court disingenuously dodged the marriage issue for a decade, apparently because it feared that a decision striking down bans on interracial marriage would imperil support for Brown.)

Rather than anticipating progressive social change, the Supreme Court most often reflects it. The Court did not express serious constitutional skepticism about sex discrimination until 1970, significantly after Congress had enacted the Equal Pay Act and forbidden sex discrimination in employment as part of Title VII of the Civil Rights Act of 1964. Similarly, by the time the Court struck down Texas’s sodomy statute in Lawrence v. Texas in 2003, most of the states that had at one time criminalized gay sex had abandoned those laws on their own.

Even when the Court articulates constitutional requirements, the active participation of the political branches is needed to meet those requirements. Brown was decided in 1954, but in 1964, less than 2 percent of black schoolchildren in the South attended schools with even a single white student. Real desegregation did not begin until the fall of 1969. Why then? Because the federal Department of Health, Education, and Welfare issued guidelines requiring desegregation and threatened to cut off essential federal funds to school systems that did not comply.

How does this history—this interplay between courts and democratic politics—bear on the question of marriage equality? To begin, I cannot think of a contentious social issue on which public opinion has shifted more rapidly. We have moved in roughly a generation from a nation in which no state provided legal recognition to same-sex couples to one in which two in five Americans live in states that do: eight states and the District of Columbia now either issue marriage licenses to same-sex couples or recognize same-sex marriages performed elsewhere. Without that change, the Supreme Court would not even consider legal protections for same-sex couples.

Yet, in contrast to Loving, on the same-sex marriage issue the Court may have to make a decision before a national consensus emerges. In recent years, 26 states have adopted constitutional amendments to prohibit same-sex marriage, making it unlikely that the political process will produce national uniformity any time soon. If the Ninth Circuit Court of Appeals affirms a federal trial court’s decision that California’s marriage restrictions violate the equal protection and due process clauses, this will create a conflict among lower courts on a question of constitutional law. That is one circumstance identified in the Supreme Court’s rules as a reason to hear a case. Even if the California marriage case fizzles out—a real possibility, given state officials’ refusal to appeal—other cases will almost certainly bubble up.

In any event, the Supreme Court’s longstanding practice of granting review virtually any time a lower court declares a federal statute unconstitutional means that if any court of appeals strikes down DOMA, the Court is likely to get involved. Here, too, the ground has shifted significantly. Attorney General Eric Holder recently announced that the Department of Justice considers DOMA unconstitutional, raising the likelihood that the federal government will appear before the Court as an ally, rather than an opponent, of marriage equality. In a letter to Speaker of the House John Boehner, Holder explained that although the Supreme Court has not yet held that classifications based on sexual orientation should be subject to special constitutional skepticism—what constitutional lawyers call “heightened scrutiny”—the executive branch has concluded that such classifications do warrant special skepticism and that discrimination based on sexual orientation is unlikely to pass constitutional muster. Gay people, he declared, are an identifiable, often politically vulnerable minority that has been subject to unfair treatment based on prejudice and stereotyping, despite a growing acknowledgement that sexual orientation is “not a characteristic that generally bears on legitimate policy objectives.” Even before the letter to Boehner, the Justice Department had disavowed the interests that Congress had identified when it enacted DOMA, including its professed desire to encourage “responsible procreation and child-bearing” and defend “traditional notions of morality.”

The prospect of the U.S. government arguing on the same side as gay and lesbian couples if the DOMA cases reach the Supreme Court may shift the atmosphere in important ways. So, too, the repeal of “Don’t Ask, Don’t Tell” may subtly influence the justices’ sense of the historical arc.

Still, the marriage cases raise anew the recurring question of when the Court should intervene to declare that a contested social issue has been resolved as a matter of constitutional law. Few institutions are more deeply rooted in the popular consciousness than marriage. That is why marriage always appears—regardless of the justice writing the opinion, from Chief Justice Earl Warren to Chief Justice William Rehnquist—in the list of fundamental rights protected by the Constitution. In considering what marriage means today, as it likely will, the Court will be aiming at a moving target. How the justices answer the marriage question may influence the Court’s political and moral capital with future generations in the way that its decisions in cases such as Loving did for mine. And so, precisely because feelings about marriage are so fundamental to so many people, there may be two institutions whose futures are on the line: marriage and the Court. 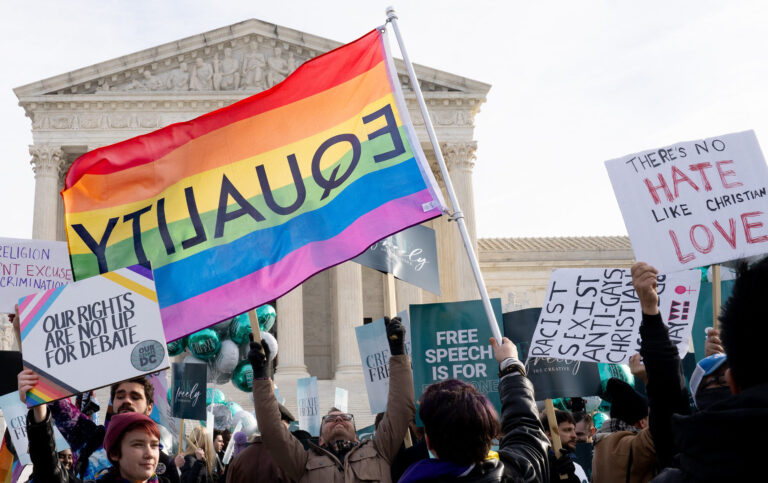